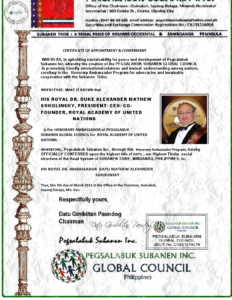 His story really began in 1979 when he was a student at Suny-State University in New York, where he attended successfully a Business program and in 1980 completed a course in International Trade at the Latin-American Institute, Manhattan, New York. In 2002 he became a Private Consultant for the Marketing of Uzbekistan Airways “In Flight Magazine”. He was responsible for its publishing and printing house in Bangkok Thailand for 10 years till 2012 (Phongwaring Printing).

In August 2004 Dr. Sokolinsky became a Member of the “San Francisco Academy”.

In 2005 his life began to take on a new and fruitful meaning while he was in Hollywood California. During his staying he met and developed a new and exciting friendship with Prince Michael Dmitrievich Kelly Romanov who fully supported his idea to establish a Royal Academy and it was at this time that out came the great name of the, “International Royal Academy of The United Nations. So, he immediately registers this name. Later that year, he re-registered under a new name, that of the “Royal Academy of the United Nation. (Without the word “International” as previously registered.) In 2005 after all the “paper work” had been completed he became the inaugural President and Founder of the “Royal Academy of the United Nations and Chamber of Inter Commerce at the Royal Academy”.

This was such an inspiring time for Dr. Sokolinsky as he was awarded by the San Francisco Academy and Peninsula University the status of an “Honorary Doctor of Philosophy” and “Doctor of Marketing” as well a “Master of All Age”, along with all the dignity and respect associated with such accolades of distinction.

2006 Dr. Sokolinsky became Hr Dr of Marketing at the Royal Academy and in 2009 he was involved in Private Consulting work for the Government of Brazil including close association links with the then Minister of Agriculture of Brazil in particular the Agricultural sector of Organic Fertilizers and Organic Farm development in Brazil. This involved extensive travel to and around Brazil and also working closely with the farmers of Brazil and the Ukraine as well with Russian Organic Fertilizer Producers.

In 2008 was awarded the “Order of Peace” by Academy of Science and Art in Russia Moscow.

More recently he has been engaged as a Private Consultant involving in a large and extensive project for Government of Congo Brazzaville in Economic development areas.

The Academy and Chamber of Commerce expanded around the World with over 8,000 Representatives, including Ambassadors, Commercial Attaches’, and presidents for the Regions.

The Academy and Chamber of Commerce developed new and ever expanding platforms for the Gold and Diamond Trade, Agricultural industry, Health and medicine consultation, Financial management and associated activities such as currency exchange consulting services, and the like.

The Academy and Chamber of Commerce also became associated with the entertainment industry including Art, Music and all types of Media including Digital.

The Royal Academy of the United Nations and Chamber of Commerce at the Academy are even associated with Sporting events either arranging or consulting through tour own sporting experts.

Some of our additional activities which run through Dr. Sokolinsky initiative include Petroleum Consulting Services, Architecture and Interior Design. Hosting or arranging Charity Royal Balls and other more general Charity programs.

Through the Academy and Chamber of Commerce we are associated with Educational Partners, Commodities trading, and IT Platform consulting to mention but some.

Back in 1996 Dr. Sokolinsky created some poetry and in 2016 used those lyrics for the Royal Academy Anthem where music was written in Moscow by the Russian composer Ilya Baburashvili.

Dr. Sokolinsky is an entrepreneur whose skills never cease to amaze to mention but one being his vision for meaningful Diplomatic Relations of value along with ideas about to be born. Indeed, a man of our time.